First, I deployed a new VM from the 2008 R2 template, and kept it with the default settings I've been using, aside from assigning an additional 50GB drive from the SSD storage to use as a data drive - I won't be able to get away with this on the SAS storage like I did with Exchange 2003 data disks. 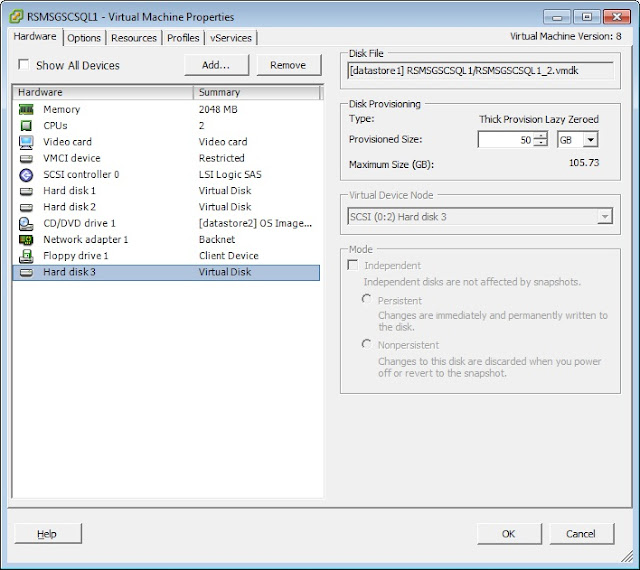 After the VM was deployed, and I had applied updates, I downloaded the SQL 2008 R2 installer and ran setup. 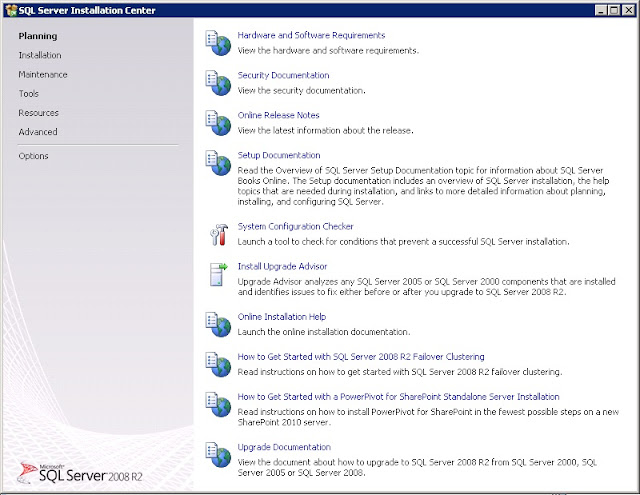 To sanity check the config I ran the system configuration checker.  All 15 checks passed. 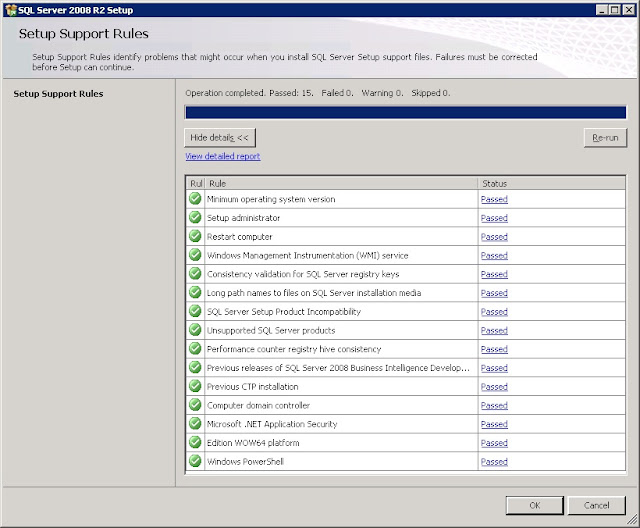 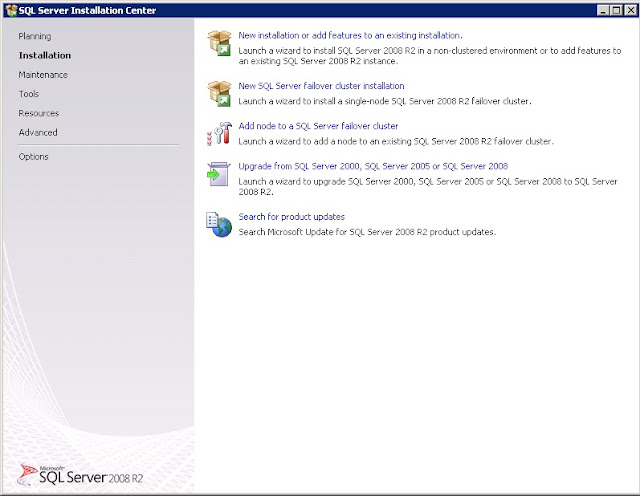 The installer launches and you are prompted to enter the product key. 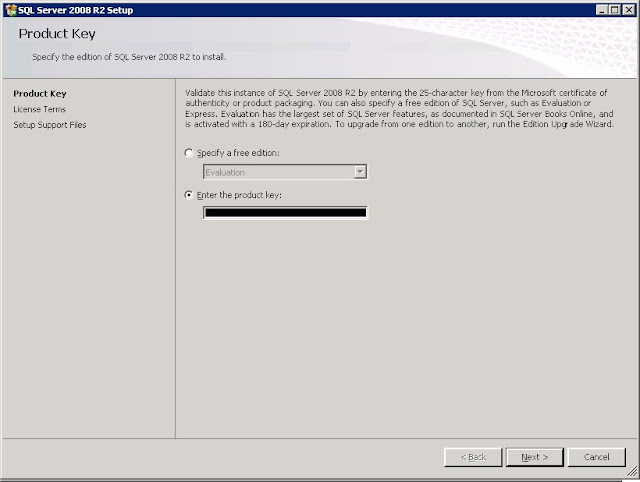 Then after accepting the licence agreement you click install to install the setup support files. 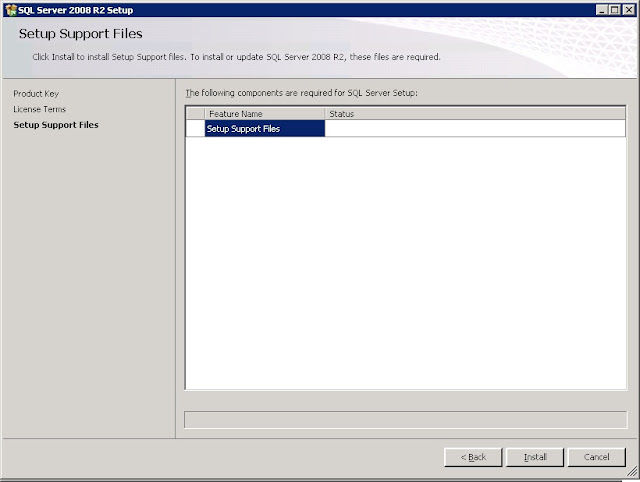 More tests are run to check for potential issues. I had one warning for Windows Firewall, but I'll be adding rules as required. 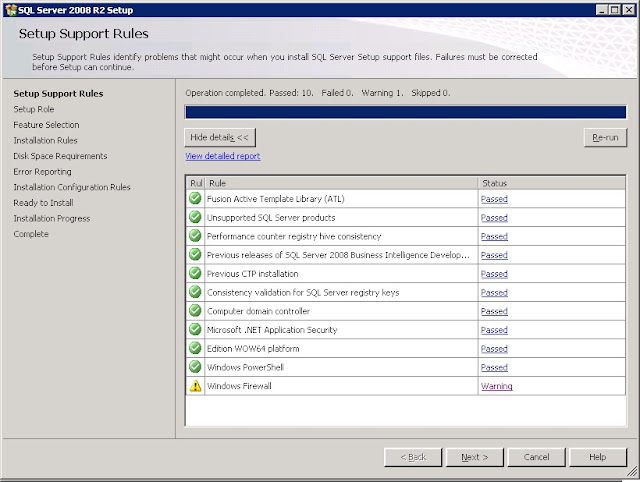 For now, I'll just be installing the database engine, and management tools. 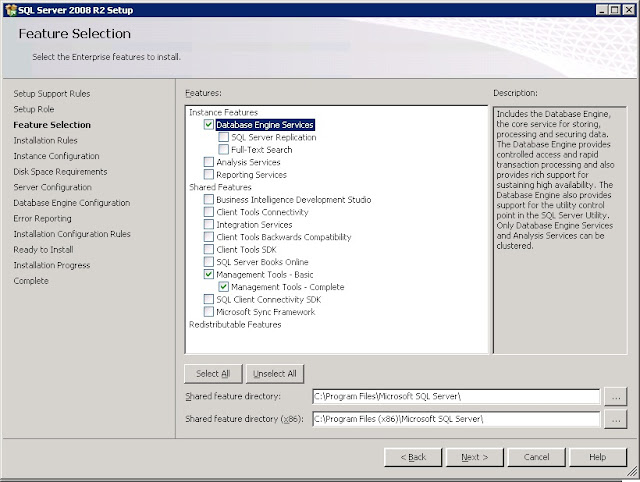 I'm installing the default instance rather than a named instance. 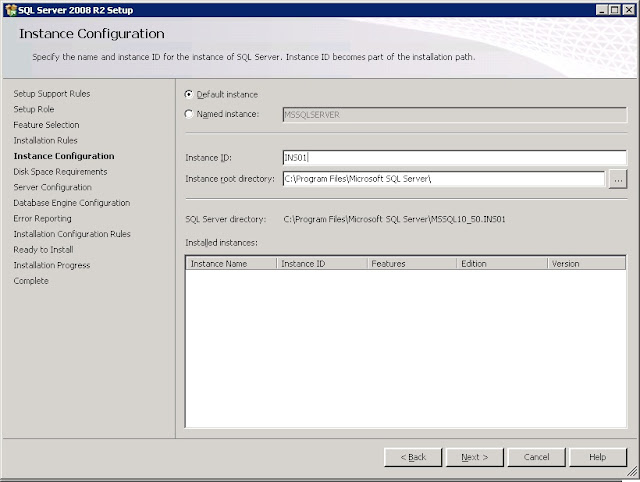 I'll be installing SQL server itself to the C:\ drive, I'll just be putting the databases on the 50GB data drive. 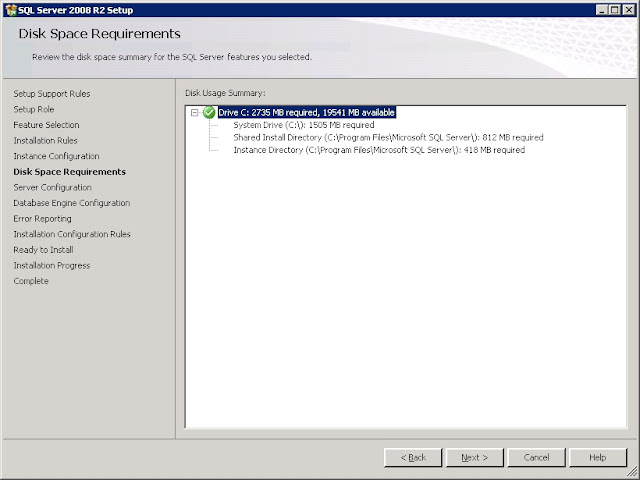 Next, I logged onto one of the DC's and and created an account for the SQL Server Agent. 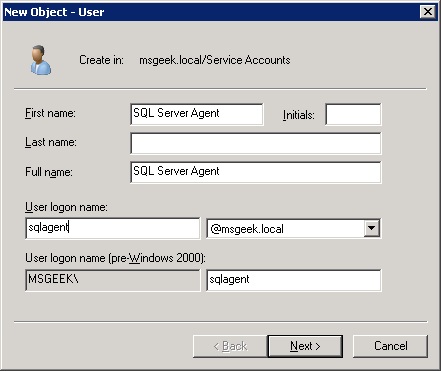 Then repeated the process for the Database Engine account. 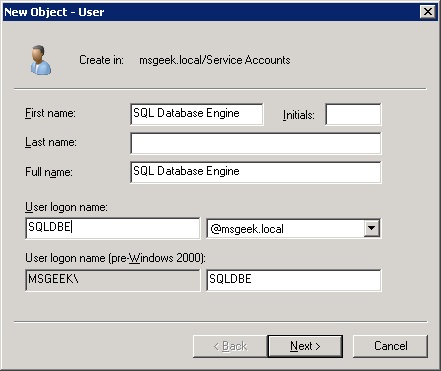 To keep things tidy in AD, I created a new top level service accounts OU, and placed all accounts that aren't for regular users in it. 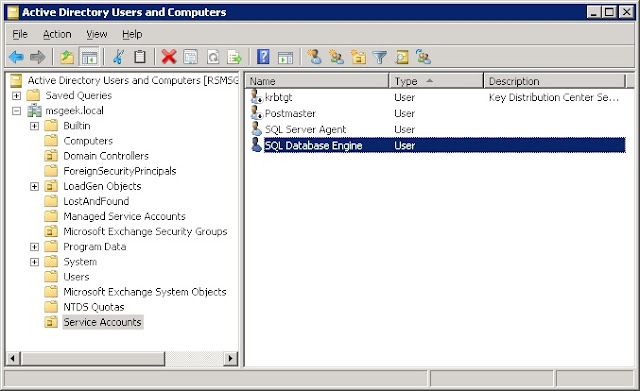 Next, back in the SQL installer, I pointed the SQL Agent account and Database Engine account at the two accounts I just created in AD.  I'll be leaving the Browser service disabled, so I left it with the default Local Service account. 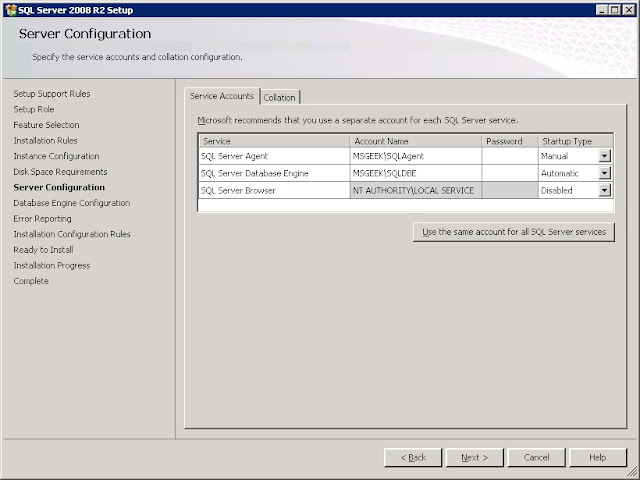 I then added the administrator account as a SQL server administrator, and changed the data root directory to the dedicated 50GB drive on the SSD storage.  I'll be keeping a close eye on the disk utilisation of this drive, if it starts getting a little large, I may look at adding another disk from the SAS storage and moving the backup directory there, but for now I'll just leave it all in one place. 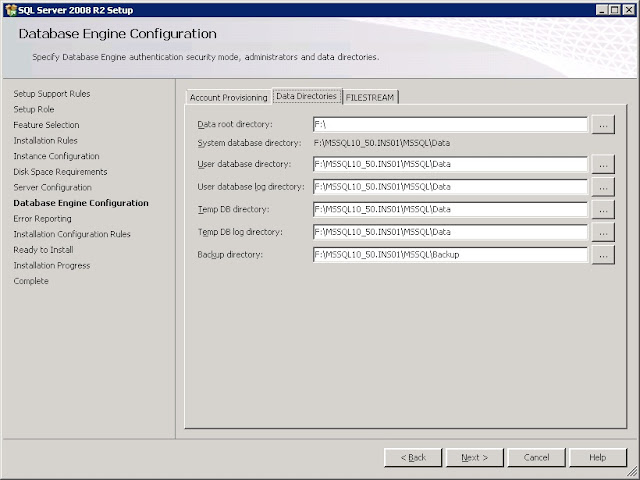 Next, I left error reporting off, and ran the additional pre-installation checks which all came back OK. 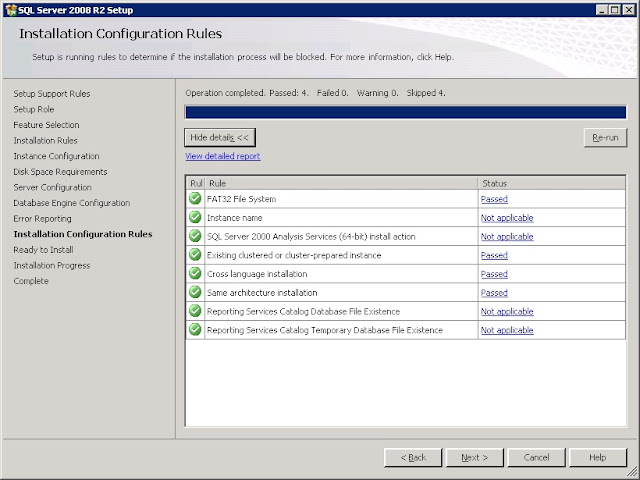 Finally, you are presented with a summary of the options selected. 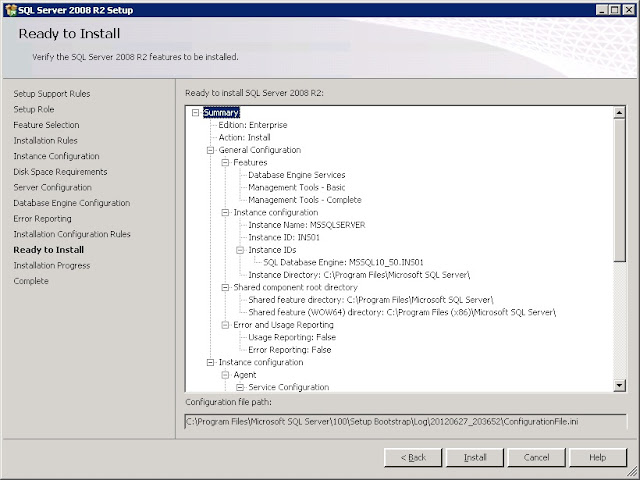 After clicking install, the installer ran and completed successfully. 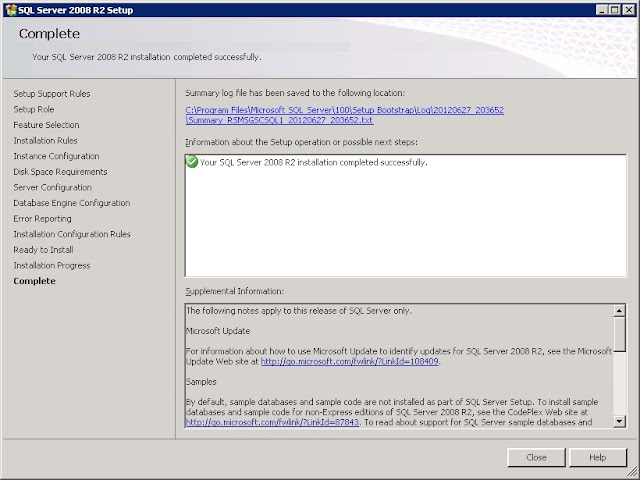 I then ran approved the SQL updates that were now needed in WSUS, and ran wuauclt /detectnow from the SQL server and applied the updates (primarily SQL 2008 R2 SP1).  Finally I performed a reboot to give all services a clean startup, and started up SQL Management Studio to ensure I could connect and all was working as expected. 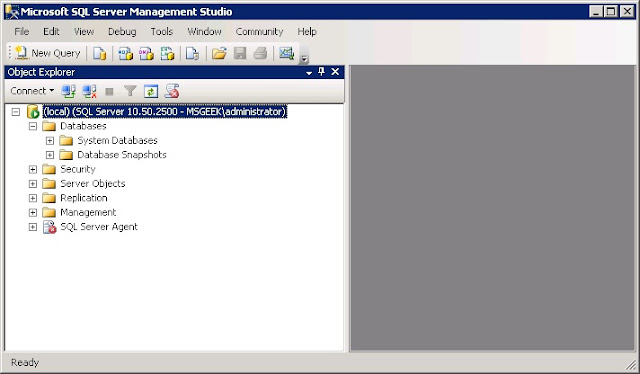